Liverpool Sound City have put on a number of nights featuring the latest and greatest emerging talent.  I was fortunate enough to catch this one at The Magnet in Hardman St on 31st March.

Due to running late I unfortunately missed The Floormen.  Word is that they were excellent so I need to make sure I catch them next time. I caught The Isrights in full flow, having missed their first couple of songs. They describe themselves as a dub-reggae/punk/psych four-piece, and that’s a pretty fair description.

Their eclectic set, energy and showmanship soon had me wishing I’d caught their full set. The Sneaky Nixons are a band that I keep hearing about.  Their name crops up on all sorts of unlikely places, including  a sticker on the lamp post at the end of my street!

With my curiosity piqued I was desperate to check them out.  They started their set with an insane amount of energy, and just kept cranking it up with every song. A band you need to see. Finally, it was the turn of the headliners – AbiChan, Abi Harding (ex-The Zutons) new outfit.

I’ve played AbiChan’s debut single “Whispers” on constant repeat since it’s release – it really is a corker of a track.  But when a new band debut with a strong lead single it sets very high expectations for the rest of their material.  Could they live up to these expectations?

This was the band’s first public gig, so would there be teething problems and rough edges to smooth out?

The band quickly put these fears to bed.  They put on a confident, assured performance which was hard to fault.  One perfect track after another quickly proved that the lead single “Whispers” is no one-trick wonder.  It is no crowd-pleaser at the end making up for an otherwise bland set.

Indeed AbiChan’s material is so strong that they played the single mid-set.  There was absolutely no filler.  As a result every track showed itself as a potential single, and a strong one at that.

I really can’t wait to catch them again and look forward to the release of their debut album.

Another blinding night out of fabulous live music, and yet a reminder that Sound City itself isn’t too far off.

Words and Pictures by John King 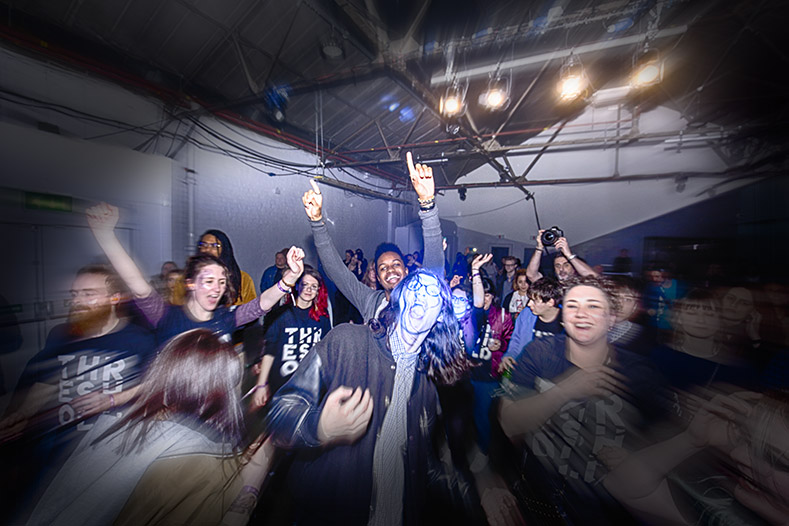