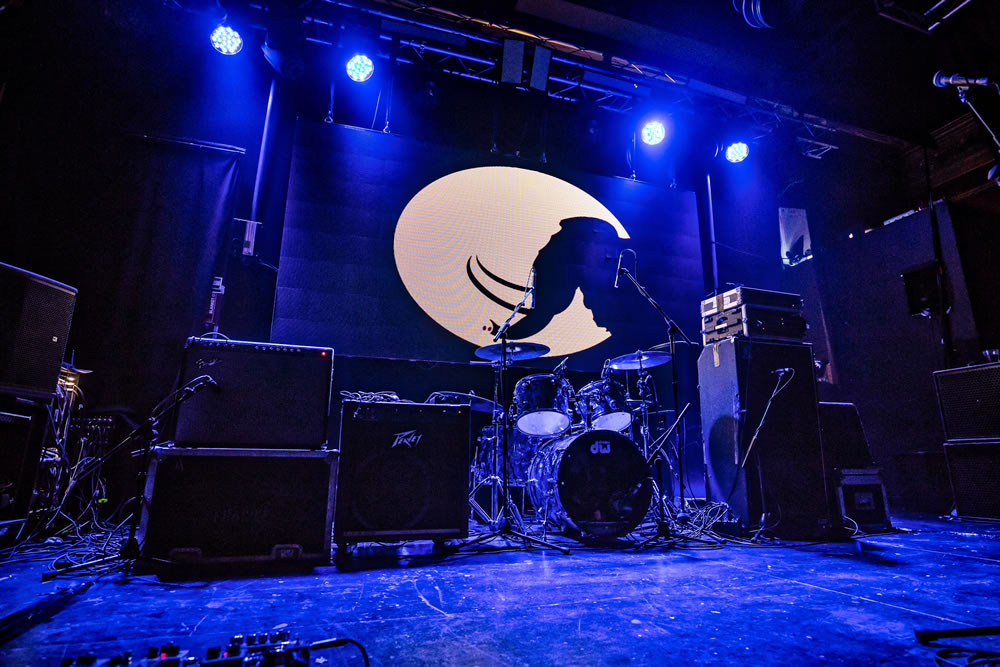 One day indoor festivals are a fantastic way of seeing a lot of bands both familiar and new, without the camping and mud you often get with traditional festivals. Unlike a traditional gig, if one band doesn’t float your boat there are plenty more to sample.

Liverpool’s own FestEVOL is well established and sets a high bar for these kind of events, so the big question is, did newcomer Club The Mamnoth Deliver?

In a word, yes! The lineup of 10 rock and psyche bands was truly impressive. The first band were on stage at 5pm with the last on at 10pm. Coordinating 10 bands in 5 hours with one starting on the other stage as soon as the current band finishes, could potentially be a recipe for chaos. But full marks to CTM for getting it to run so smoothly with all the bands on stage on time without any hiccups (that is, aside from The Fall being about 20 minutes late, but as any Fall fan can testify, getting Mark E. Smith on stage at all can be a challenge!)
Whilst this was the inaugural Liverpool outing of CTM, they are already well established in London and Brighton, and their experience, attention to detail and professionalism shines through.

“All killer, no filler” is a cheesy cliché, but on this line-up it’s perfectly apt. Indeed if I were to be a tiny bit critical of the day at all, it’s that there was not a single band on the bill that I wasn’t fussed about, they were all “must see” so I didn’t get a chance to go and have something to eat until after midnight!

So, which bands stood out? Well I could go through each of the bands writing a glowing account, but I’d begin to sound like I work for the promoter! Don’t just take my word for it, go through the list of bands on the line-up and check out any that you aren’t familiar with using your favourite online music streaming service. If you like music, you seriously won’t be disappointed!

One act you won’t find on any streaming service though is Pink Kink who I’d been hearing good things about for a while but could never find any of their music online. Their management assure us that this will be remedied soon, but meanwhile if you get a chance to see them, take a leap of faith and go – you’ll thank me for it later!

Cabbage are very much the buzz band of the moment, both being tipped on various sound of 2017 lists, and getting attention for not pulling any punches in their stinging response to a certain Rupert Murdoch owned tabloid putting them on their list, which went viral. Of course, every year there are buzz bands many of whom are billed as the saviours of rock and roll, but sadly they tend to be all hype and no-substance, and just fade away as quickly as they arrive, and a lot of so-called “punk” bands give the impression they’ve been watching their parents Sex Pistols DVD and practising in the mirror, as scary as a wet lettuce.
These guys however appear to be the real deal, with band and fans alike creating an exhilarating sense of unease, mayhem and danger where you feel anything can happen. A new band willing to rock the boat is long overdue, and they are likely the closest we’re going to get to the excitement of mid-70s early punk gigs.

It’s no surprise therefore that their live shows have been selling out so quickly, if you get the chance to experience one, don’t muck about, just go!

How about the headliners? Well, in a way it seems pointless reviewing The Fall. If you haven’t heard of them, you probably wouldn’t like them. If you’ve heard “Touch Sensitive” from the car ad or maybe know “Hit The North” and you’d expect a crowd pleasing hour of hits, you’d be bitterly disappointed. If you’re a Fall fan then you probably know that they/he can be very hit and miss, one time they can be amazing and you drag all your friends to the next one, and they are dire, but it’s all part of what makes The Fall!

On this particular outing, I’d give them 7/10 – he seemed a bit subdued, not even messing with the amps as much as usual, so not the best performance I’ve seen from them (that would be Kentish Town Forum back in the 90s I think), but not the worst either by a long way, and to be honest, after seeing 9 amazing bands I’d had my money’s worth and The Fall were the icing on the cake.

To sum up, great line-up, well organised, great venue, staff were friendly and helpful, no real complaints at all.
This was billed as the Inaugural event – let’s hope the figures added up and we can look forward to more Club The Mammoth events in the near future.