The third Single from Psycho Comedy’s tremendous debut album ‘Performance Space Number One’. Although a different beast to Pick Me Up, Numb succinctly embraces the anarchic patchwork prototype of the punk sound, which is becoming a badge of honour for the band amongst their peers attempting to shake the genre into a new zenith. As far as superlative comparisons go it would be impossible to ignore the pulsing oscillations of Iggy Pop, or Echo and The Bunnymen, or indeed the vocal overtones of Conor Oberst. A heady mix indeed, but in utilising these ingredients they are delivering a lip smacking new flavour of their own.

Psycho Comedy are an art collective from Liverpool. Since their formation in 2015, they have now grown into a group of seven with a poet (Matthew Thomas Smith) and an in-house artist (Sophia Rose Powell) now frequent collaborators with the unit. In their work, Psycho Comedy aim to paint a world not only through rock’n’roll music but through many forms of art, including poetry, photography and film. 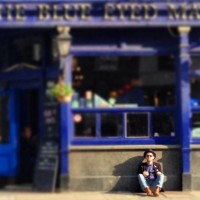 Dream Wife Interview.. we caught up with our three favourite wives