Each year, as well as my regular festival haunts – Glastonbury (sadly, no ticket this year!), Bearded Theory and Threshold, I like to try a different festival that I’ve not been to before, one that’s maybe off the beaten track and quirky or different in some way.

Last year’s choice was the rather excellent Electric Fields set in stunning Scottish countryside (this year it’s moved to a new indoor venue in Glasgow SWG3, which sounds quite an interesting venue, but it doesn’t seem to have gone down well with everyone).

This year, The Downs Festival Bristol caught my eye, a one day city festival located in Bristol.

With any festival, the lineup is always the first thing to grab your attention – and this one is really solid, tight as a drum with no filler and a cool vibe reminiscent of the Bristolian trip-hop scene back in the 90s, though with some rock thrown in for variety and good measure!

Grace Jones needs no introduction – Iconic. A true innovator in music, style and fashion. Watch some of her early performances to see where everyone from Madonna to Lady GaGa got some of their ideas from!

Here is a fairly recent concert – she’s still got it!

Award winning American singer, songwriter and rapper, known for being a member of Fugees, and for her solo album The Miseducation of Lauryn Hill, which won many awards and broke several sales records.

An English hip hop musician and actor. His sound has been described by NME as “sensitive and eloquent” and by The Guardian as “confessional hip-hop”. He was raised by his mother and stepfather who influenced his talents from a young age, whereby he went on to pursue a career in music.

Idles have their roots in the Bat-Cave Night Club in Bristol, run by singer Joe Talbot and bassist Adam Devonshire, who met while at university in Exeter, eventually deciding to start a band. According to Talbot, “It took us a long time to get productive because we didn’t know what the fuck we were doing at all, we were f*cking terrible for a long time.” The band’s first release was the Welcome EP in 2012. By 2014 the band comprised Talbot, Devonshire, guitarists Mark Bowen and Lee Kiernan, and drummer Jon Beavis. They released a second EP, Meat, and Meta, an EP of remixes, in 2015, and then started writing songs for their debut album.

To date, Neneh Cherry has released five studio albums under her own name. Her first, Raw Like Sushi, was released 1989 and peaked at number three on the UK Album Chart, thanks in large part to the worldwide hit single “Buffalo Stance”.

George Evelyn, better known by his stage name Nightmares on Wax or DJ E.A.S.E., is a DJ and electronic music composer from Leeds, England. His music is released on Warp Records and was one of the first releases on the label.

Evelyn got his start in the music industry through an interest in hip hop and on joining a local breakdancing crew. He started as a DJ with John Halnon then Kevin Harper and together they released their first album in 1991, A Word of Science: The First and Final Chapter. Halnon is an established engineer/producer, Harper has since become a solo DJ, and Evelyn partnered with Robin Taylor-Firth.

Fontaines D.C. are a Rock band from Dublin who everyone seems to be talking about at the moment!

The band released its debut album Dogrel on April 12 2019. The NME said that “Dogrel proves that early-days pinning as punk’s next great hope was perhaps premature – there’s far more to Fontaines D.C. than your typical thrashed-out, pissed-off young rebellion.”

The Guardian gave the album a five-star review, hailing it as a “perfect debut”, and commending Chatten for embracing the Dublin accent.

Crazy P (formerly known as Crazy Penis) are an English electronic music group, formed around 1995 by Chris Todd and Jim Baron and have since released six albums and several singles

The band began using ‘Crazy P’ exclusively in 2008 with Moore explaining “We wanted to grow, and keep growing, so there was no point in cutting our nose off to spite our face by keeping the original name.”

Aside from the stunning lineup, the festival ticks all the boxes.

First of all, it’s in Bristol – every time I go there I have a great time, always a cool vibe.

Secondly, it’s a one-day city based even which means that you can stay in a hotel – though I don’t mind camping as a means to an end, it’s nice to be able to travel light, and have a proper bed and shower at the end of the night!

Besides the 2 music stages, Downs and Avon, there is The Information Stage, a space where key note speakers address issues affecting UK society. After dark it turns into another music stage featuring new musical talent.

Additionally, it is kid friendly with a promise that the Children’s Area is returning bigger and better than ever, with activities, workshops, dancing and much more.

Adult day tickets are a very reasonable £55 + Booking Fee (£29.50 for the unemployed or on income support, and only available in person from Bristol Ticket Shop with supporting ID) and kids tickets are just £15.

All tickets are subject to a £1 Down levy which goes towards the upkeep of The Downs.

I must admit, it all looks very tempting! 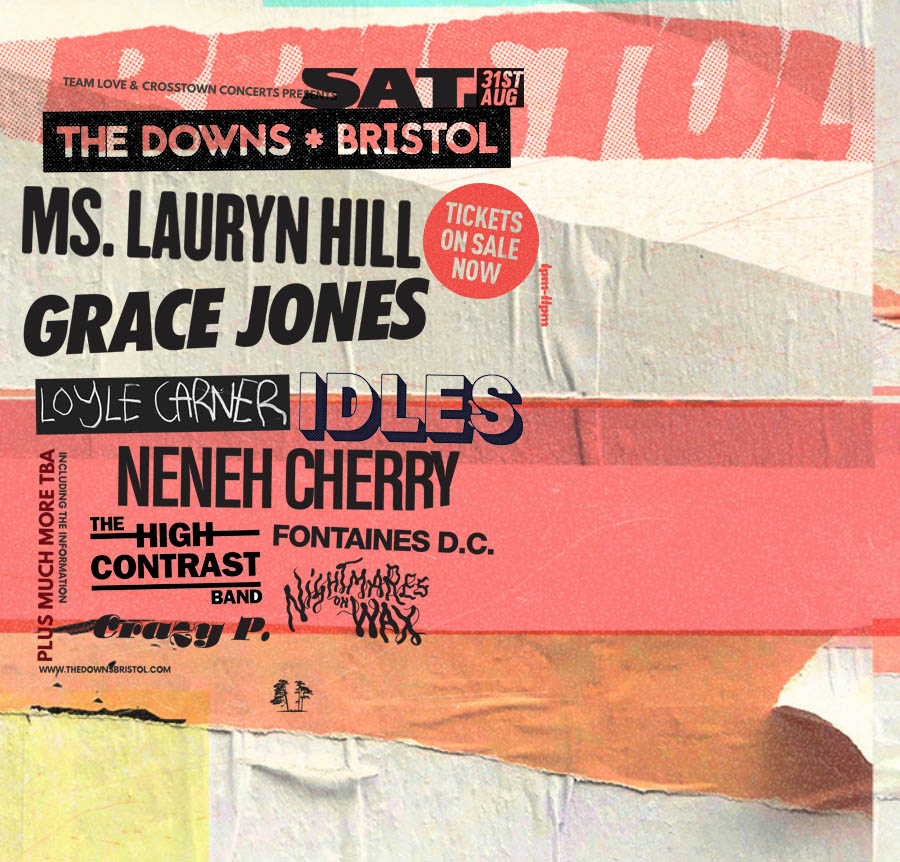 If you fancy extending your festival to 2 days, you can’t go far wrong with Madness on the Sunday! 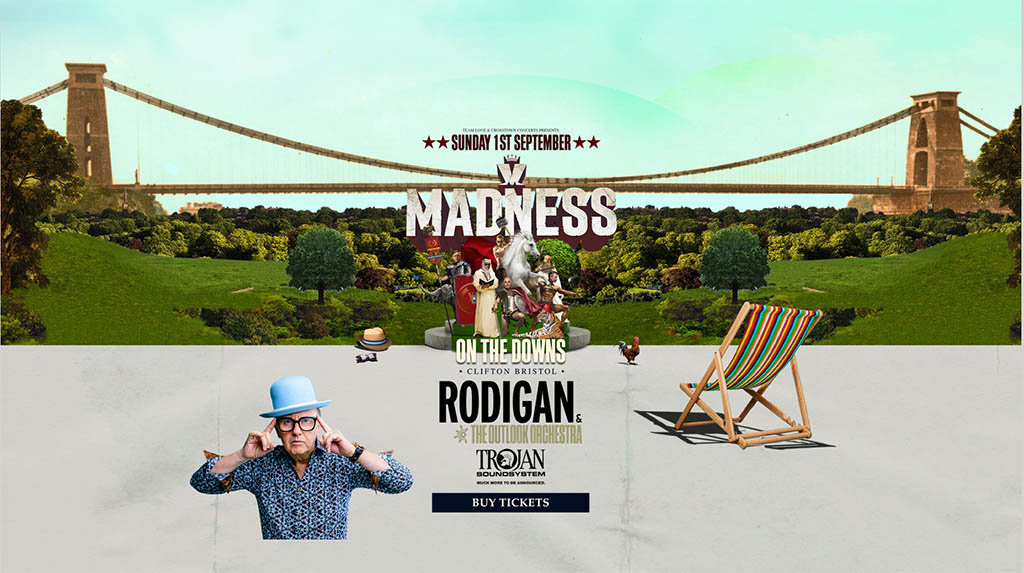 Sunday 1st September will see the British ska pioneers head to Bristol for Madness On The Downs, a one-off gig from local promoters and the organisers of The Downs Bristol – Team Love and Crosstown Concerts.

Giving the Bristol summertime an extra special send off, the one-day event will also feature esteemed reggae DJ David Rodigan performing with the Outlook Orchestra, as well as the iconic Trojan Soundsystem.

Having had 17 singles reach the UK top ten, including “One Step Beyond, Baggy Trousers and It Must Be Love, Madness soared to success in the early to mid-1980’s spending 214 weeks on the UK singles charts over the course of the decade.

Madness founder and frontman Suggs, had this to say:

“Friends, mad heads and countrymen, lend me your ears. This year be the 40th anniversary of the groupus maximus MADNESS XL and to celebrate the country will be witness to celebrations of Romanesque proportions!”

Dave Harvey of Team Love, said: “We had an incredible opportunity to bring these fantastic acts to the city and being able to use the existing infrastructure from The Downs Bristol, taking place the day before, has helped make this a possibility.

“Madness is one of the most iconic British bands of the last 30 years, Rodigan is legendary figure who you can always rely on to big the big party vibes and Trojan is an institution of British sound system culture… so we’re certain this is going to be an incredible day.”

David Rodigan has long been a pioneer of reggae and dancehall music and by the age of 15 was regularly DJing at school dances and youth clubs, going on to forge a reputation as one of the most forward thinking DJs. In 2017 Outlook Orchestra performed to a sell-out crowd on Bristol’s Amphitheatre.

Formed in London in 2014 Trojan Sound System brought together some of the most talented selectors and vocalists in Daddy Ad, Superfour, Chucky Bantan and Jah Buck, representing the most seminal reggae and ska label in history.

Tickets for Madness on The Downs will be on sale from Thursday April 4th priced at £39.50 plus booking fee and Downs Levy and available from 8am at to personal callers at Bristol Ticket Shop and general release at 9am via www.madnessonthedowns.com

(Again, all tickets are subject to a £1 Down levy which goes towards the upkeep of The Downs.)

More details and tickets for both events can be found here: https://thedownsbristol.com